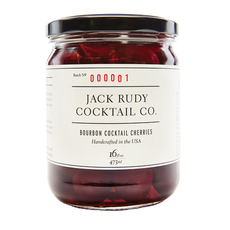 Kentucky roots for inspiration, combining Bourbon from our home state with Oregon cherries. The result is the ideal companion to any number of drinks, most notably those made with whiskey. You might find them good enough to eat straight from the jar.

The company was named after great-grandfather, Jack Rudy. His story, entirely true, and on the side of our bottle, is this:

���Jack Rudy was many things. He was a pilot who illegally ���ew his plane under the Ohio River Bridge (on a dare), an inventor who created a mechanical device for pharmacists to count pills, and a craftsman who once built a houseboat out of an old city bus. After serving as an aircraft mechanic in WWII, he spent his working life as an engineer. He read Popular Mechanics and National Geographic cover to cover - a curious type who made his own bullets, and shot them into a dirt wall he constructed in his basement. In addition to being a ���marvelous�۪ dancer, he LOVED to entertain and was known to overindulge in drink, smoke, and his wife�۪s gourmet cooking.